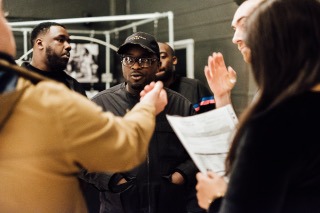 
Femi Oyeniran is an award-winning actor and filmmaker who has starred in hit films including Kidulthood and Anuvahood. His first feature film as a writer, director and co- producer, It’s A Lot was released theatrically in 2013.
On completing his law degree at the London School of Economics, Femi decided to focus on acting and filmmaking, which led to him producing a feature length documentary about Fatherhood, which features Trevor McDonald, Tinie Tempah and Spike Lee. In 2015, he partnered with Victor Adebodun to produce the 10×30 minute comedy series VENUS Vs MARS for Sky Living. He also has a producer credit on Sky Atlantic series Tin Star, which stars Timothy Roth.

In 2016, he co-wrote, co-directed and produced THE INTENT, which was released to unprecedented commercial success. It opened to sold-out cinemas and landed at number 3 on the iTunes Movies Chart and is now available on Netflix around the world. The prequel THE INTENT 2 (aka THE COME UP), which was shot in the UK and Jamaica is set for a September 2018 release. He also recently wrote an episode of a Netflix Original series starring Idris Elba called Turn Up Charlie.

In 2015, he was selected as a Ones To Watch by the Edinburgh International TV Festival and a Broadcast Hot Shot by Broadcast Magazine. In November 2016, he also acted as the executive producer on ITV2 mockumentary DROPPERZ.