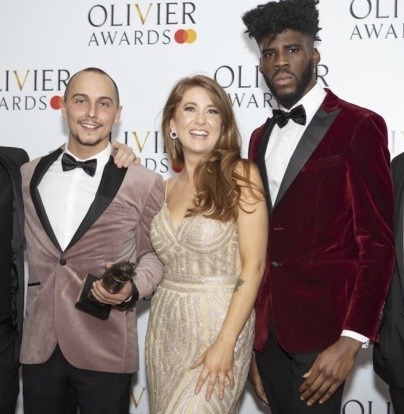 Two years ago Elliot Warren was performing his debut play in front of two or three people a night. Now he’s won an Olivier Award for it.

It’s been a meteoric rise to the top for Flesh and Bone, which is about a family living in an East End tower block up for demolition and features a mix of rap, grime, Tarantino-esque dialogue and Shakespearean language.

It was written out of frustration in 2016 when Elliot and his girlfriend Olivia Brady, both drama school graduates, were finding it hard to get work.

Elliot, 27, has lived all over east London, and his family have lived in Hackney for decades.

He and Olivia directed the play together and both star in it, along with three others. It’s fair to say it’s been a long old journey, from the play’s inception to rubbing shoulders with Ian McKellen and Gillian Anderson at the star-studded awards bash at the Royal Albert Hall last week.