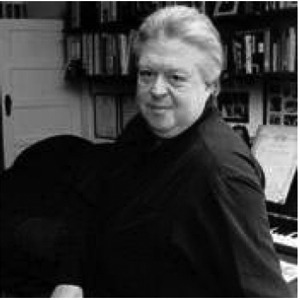 He has lived in Holland and Germany and has written four operas, five musicals and a radio music drama – THE ONE ALONE – with Dame Iris Murdoch as well as animated and live action film scores, several ballets and a large amount of concert music.

He is a Senior Lecturer at the Royal Academy of Music [London] and teaches composition at the Royal Northern College of Music [Manchester]. He regularly guests as a professor on National Youth Orchestra courses and was musical director and/or arranger- orchestrator on many films including The Wicker Man and The Hitchhiker’s Guide To The Galaxy.

His Van Assendelft’s Vermeer for clavichord won the British Clavichord Society Composition Competition (2004) and was nominated for a British Composer Award (2005). Azaleas for harp trio won a Victor Salvi Award in Venice (2004). The BBC recently commissioned and broadcast his Concerto for Horn and Orchestra. His Songs Of Sadness And Piety for voices, saxophone, organ & percussion awaits imminent release on Christian Forshaw’s Sony/BMG CD Renouncement.