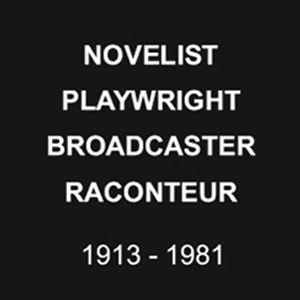 Gwyn Thomas, who died in 1981, was born on 6th July 1913 in Cymmer near Porth in the Rhondda Valley, the son of a miner—’an underground ostler with no love of coal and no luck with horses’. He was the youngest of twelve children. His mother died when he was six and he was brought up by his older sister, Hannah better known as Nana.

In 1930 a State Scholarship took him from Porth Grammar School to St. Edmund Hall, Oxford to study modern languages and a Miners’ Scholarship later enabled him to study for six months in Madrid before graduating in 1934.

His first job was as a lecturer for the Workers Educational Association in South Wales. Then after his marriage to Elunid (Lynn) Thomas in 1938 he worked as a social service officer in Lancashire and Cheshire before going to Cardigan Grammar School as French master in 1940. (A serious thyroid condition for which he was operated upon in the late 1930’s meant that he was unfit for war service.)

In 1942 he moved to Barry Grammar School where he taught Spanish for the next twenty years before devoting himself entirely to writing and broadcasting.

Although Gwyn Thomas began writing soon after coming down from Oxford, it was not until after the war that his wife sent three of his manuscripts to publishers. These met with instant success when in 1946 he had published Where Did I Put my Pity? and The Dark Philosophers and in the following year The Alone to the Alone.

He was a prolific writer. Everything was written in long hand in exercise books and then typed by his wife. Eventually he filled about five-hundred of these books, with fourteen novels and collections of short stories, numerous radio and television plays, stage plays and essays for a variety of national and international magazines including Punch.

Gwyn Thomas lived virtually all of his life in South Wales near Cardiff and wrote almost entirely of his experiences in the South Wales valleys. His first novel ‘Sorrow For They Sons’ was published posthumously in 1986 and was altogether harsher than the style for which he later became better known. The Welsh writer Glyn Jones (a long-time friend of Gwyn) described his as a serious writer who chose to make serious points by means of humour. This became the hall-mark of his later writing style and of his numerous radio and television appearances. Radio’s and television’s Brains Trust, Any Questions, The Eamon Andrews Show, Parkinson and Week in Week out with Vincent Kane. In 1996 his autobiography A Few Selected Exits was filmed for the BBC as Selected Exits starring Sir Anthony Hopkins as Gwyn.

Of his stage plays The Keep was the most commercially successful having had a west end of London run and having been staged for television twice. Others included Jackie the Jumper and a musical, Loud Organs.

More recently the Welsh Assembly Government has established the Library of Wales under the direction of Prof. Dai Smith to ensure that important books in English by Welsh authors remain in print. The Dark Philosophers with a forward by Elaine Morgan appeared in 2006 (Parthian) with a Spanish translation the following year. At the end of 2008 the Library of Wales also published Gwyn’s, The Alone to the Alone (Parthian) with a forward by Ian Rowlands.